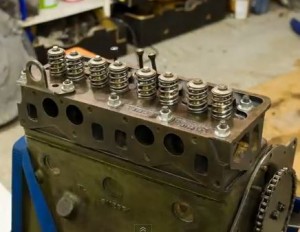 This video shows a full engine restoration all in stop motion (a series of still pictures combined to make a video).  It looks like his hard work paid off because the video has over 3.5 million view on YouTube!  Check it out below.

Started out as just a collection of snaps as I stripped down an engine bought off ebay. (To replace my old engine, which had suffered catastrophic failure). The snaps were so that I remembered how everything went, so I could put it back together again.

Then I realized it’d be quite cool to make it an animation. found some suitable music, rekindled my ancient knowledge of Premiere, storyboarded it, shot it as I worked on the engine (my poor DSLR got covered in engine oil), this was the result.

The music is “In The Hall Of The Mountain King” from Edvard Griegs “Peer Gynt Suite”
I own a suitable license for this piece of music, supplied by Chris Worth Productions