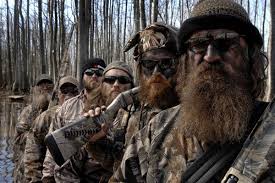 Everyone has watched or heard of A&E’s “Duck Dynasty” show featuring hillbillies with long gray beards and camo.  Well, the most well known star Phil Roberston is in deep water after making comments about homosexuals in an interview with GQ.  His comments?

In an interview with GQ, Robertson called gay people “homosexual offenders” and seemed to equate gay sex with bestiality. He also said that he “never” saw blacks mistreated in the pre-civil rights era. “No one was singing the blues,” he said.

The comments were quickly condemned by GLAAD and the NAACP. On Wednesday, A&E said it was “extremely disappointed” by Robertson’s remarks and put him on an indefinite hiatus from the show

What do you think?  Did Phil cross the line with his comments?  This is the reason why his story went viral, because there are so many opinions on the subject.  Some are saying, good for him for speaking his beliefs, then others say he is disgusting and has no right spewing out his opinions on homosexuality.

Well I would say that could be a little offensive to some homos*xuals. Now if I was in the same room and could defined myself against his opinion with my opinion and get his insight then maybe not so much but…

Screw A&E and the producers. Phil was just telling the truth. About all of it. I think everyone should quit watching the show or even the station until they put him back on. If people don’t want to hear what he has to say turn the channel. It’s not that hard that’s what I do when I don’t like something on tv. Go Phil your my hero tell them the way it is and if they don’t like it to bad jack.

Tyler is right SREW THE DUCK DYNASTY PRODUCERS!!!!!!!! Phil should be able to speak his beliefs !!!!!!!!
Phil is a hero to me!! I have no clue why you would kick him of the show. If you kick any one else of then why even watch it!!!!!