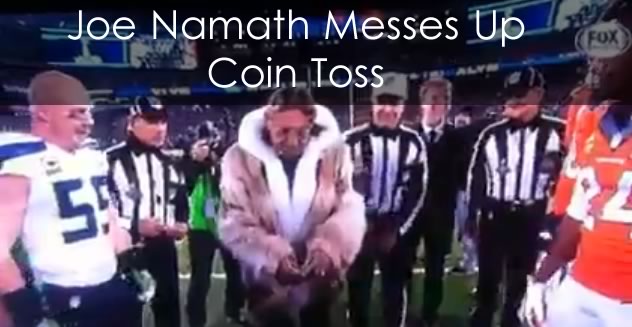 Joe Namath is a hall of fame quarterback is known for his amazing career as a quarterback, however there are a few recent media appearances that have been quite embarrassing for him.  The first incident was when he wanted to kiss a reporter during and interview because he was drunk.  He obviously was drunk because he was slurring and making no sense.  He later apologized and said he was drinking since three that day and was embarrassed.  This Super Bowl he was chosen to toss the coin to decide who received the ball first.  I don’t know why they chose him after his last appearance, but here goes.  Joe Namath came out in his classic fur jacket and right after the ref gave him the coin he tossed it in the air.  The ref laughs and grabs it because he didn’t even get a chance to explain the rules yet.  It’s a little better to understand if you watch the videos below:

Joe Namath “I want to kiss you” video