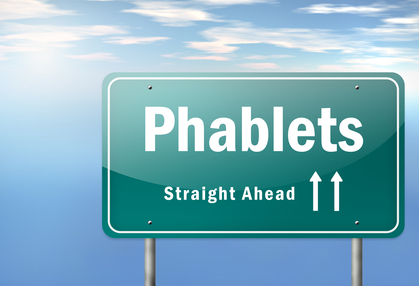 Phablet sales are soaring, according to iSuppli, a market research company. In 2012, 25.6 million “phablets”—or hybrid smart phones and tablets with screens 5” or larger—shipped worldwide. That number is predicted to reach 146 million by 2016. In fact, phablets are getting so popular, that Dockers has redesigned their signature pants with larger pockets to accommodate the devices. But are phablets are fabulous find or a fad?

A phablet is a device that combines the note-taking ability of a tablet with the communication features of a smart phone. Phablets offer screens of 5″ or larger, which makes reading lengthy documents or watching movies easier. One example is the phablet from Samsung Galaxy Note. The Galaxy Note starting dominating the market in 2011. Their use has grown rapidly, with 2013 coined “the year of the phablet” by some pundits, as Marketing Land points out.

Pros and Cons of Phablets

Phablets are said to combine the best features of both a traditional tablet and a smart phone in one device. Typical benefits cited by phablet owners include:

However, phablets do have some drawbacks. These include:

Will Phablets Overtake the Market?

Mobile phones currently account for 17% of all internet traffic, according to GFK.com, and that number is expected to grow. Phablets, with their ability to bridge both the world of tablets and smart phones, may speed the growth of mobile internet access even more. Adoption of phablets will depend on many factors, including consumer acceptance and price.