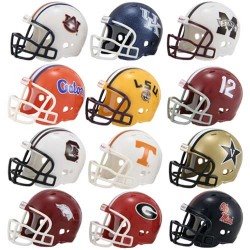 Have you heard this one yet? The SEC (South Eastern Conference) is now trying to control, no… eliminate, social media activity from fans during football games.

That means leave your iPhone, Blackberry’s, and Twitter / Facebook hungry mobile phones at home – the SEC says you might just be breaking the law if you start tweeting during the game!

TampaBay.com is reporting that:

…this policy was meant to try to keep as many eyeballs as possible on ESPN and CBS — which are paying the SEC $3 billion for the broadcast rights to the conference’s games over the next 15 years — and also on the SEC Digital Network — the conference’s own entity that’s scheduled to debut on SECSports.com later this month.

The following restrictions are going to placed on fans:

This sound to me that who was once the SEC’s biggest money maker – the fans, alumni, and students – are now the enemy at the gates!

Maybe with all of this they will actually ban mobile devices from the stadiums all together!

In my honest opinion, that’s about what it’s going to take to keep social media content from flowing – just ask LeBron James and Apple.

When Lebron James was dunked on by a college player at some camp, he tried to have all videos collected and confiscated in order to prevent the video from leaking out.

Well… we all know how that went (see video below).

And then Apple tried to silence the family of someone who had an ipod explode.  Once again, the freedom of content flowing through social media won over, and ultimately Apple has a PR train wreck on their hands as a result.

So it was with LeBron James and Apple, so it will be with the SEC.  Try to restrain the flow of content through social media, and you’re always left looking like the fool.

It will be interesting to see how this all unfolds.

What are your thougths about banning tweets, photos and videos being uploaded, etc.. during games?