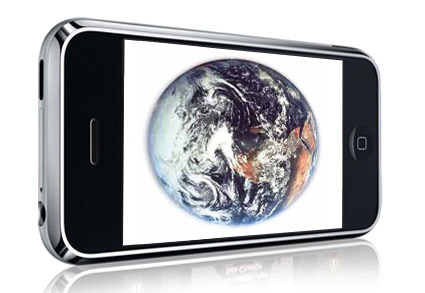 Can anything stop the iPhone?   I mean, the iPhone could very easily overtake the world by tomorrow morning!

Earlier today there was the news release that the iPhone GPS App by TomTom is now available, given drivers a much more convenient (and cheaper) way to have GPS – and giving GPS competitors a very rude awakening first thing Monday morning.

And now the iPhone is being reported on both the LATimes and Mashable as being the #1 camera on Flickr.  Meaning, the iPhone is the most popular camera according to Flickr users.

So whether we are talking about turn by turn navigation or digital camera, the iPhone is stealing the show.

Here’s what the LATimes is reporting as the biggest contributor to the iPhone’s rise in popularity on Flickr:

The newest iPhone 3GS added much-improved photo-taking quality, with features such as video, auto-focus and white balance. Still, its lack of a zoom lens and a flash put it at a major technical disadvantage compared to dedicated point-and-shooters like the 10- to 12-megapixel Canon Rebels.

Without question, some of the main featurse that are in the works for future releases of the iPhone would be the zoon lens and flash, making it a not only easier to share photos, but putting all camera brands on high alert!

Below is a graph of the iPhone popularity data from Flickr: