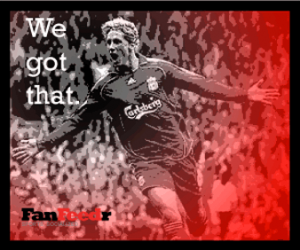 Have you heard of FanFeedr?

Me neither until today.  And let me tell you what drew me to their site.

It’s not the fact that they advertise themselves as having live, up to the minute news, Twitter updates, videos, and more from sports, nor was it the fact that I could actually type in “Georgia Bulldogs” and get all of the above on just my favorite team.

Oh no… what drew me to FanFeedr to see what’s up was the fact they promoted themselves as “you can sign in with 3 clicks using Facebook!”

So I went over to FanFeedr, and of course instantly typed in “georgia bulldogs” into the search bar.  Actually, I accidentally typed that into an update and sent it to Facebook – but I quickly realized I was typing in the wrong spot – my bad!

What’s awesome about FanFeedr is that no only can you click and see the type of information you want like blogs, news, videos, photos, etc…, but that you can also see “what’s hot”, “most viewed”, “fewest viewed”, and more for your specific searches.

Or if you don’t want to search for a specific team, you can always just browse through the different sports categories.

The Social Intergration of News:

What impresses me the most about FanFeedr is the Facebook integration to the site.  So me, as a fan, I can not only peruse the news, blogs, and videos, but I can now make comments via Facebook about the news and actually engage a conversation with my friends!

This is the social integration of news and content on the web that I believe is the future of where the Internet is heading!

Logging in with your Facebook profile means that people want to keep all of the their activities online isolated to one account, and people want to include their friends, collegues, business associates, etc… in the different places they go on the web.

So even though FanFeedr is an evolution of sports news and social networking, I think it represents a much higher level of development and online activities that are going to shape the future of the web.