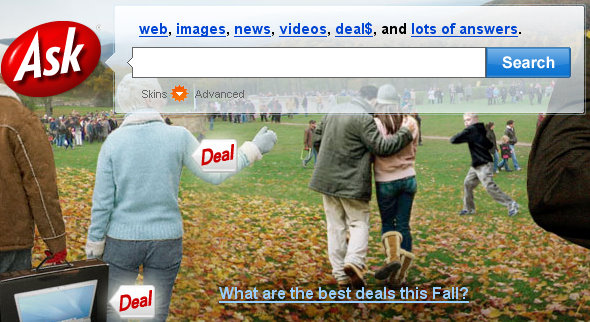 The search engine Ask.com added a new service on Tuesday to “help consumers seek out coupons for saving money when shopping online”.

The new service, Ask Deals, helps users search the Web for deals available by aggregating the best offers to a proprietary database of more than 1 million offers from national and local merchants.

I was surprised to find, however, that the “Deal$” link was not yet showing in my iPhone when I went to Ask.com – which defaults to the mobile version of the site.

However, once you search a phrase from the iPhone, the next screen gives you a standard HTML version of Ask.com, and you then will see the “Deal$” link.  But I would’ve guessed that it would show on the mobile version’s homepage – perhaps that update is coming.

The majority of Ask’s revenue comes through a search advertising partnership with market leader Google Inc, which brings up links of relevant advertisers in response to a user’s search query.