I sent out my first post this morning around 5 AM about the breaking news of Verizon and Google having a conference call to discuss a partnership with Android – Google’s mobile phone operating system.

Then later in the day, prior to the 10AM conference call, I did an update to the story that said an agreement has been solidified between Google and Verizon.

And then again, a couple a hours later I wrote again about how word came out that Verizon would have 2 phones with Android OS on the market by the end of the year.

And here it is – the photo we’ve all been waiting for, along with a photo of Eric Schmidt and Verizon CEO Lowell McAdam: 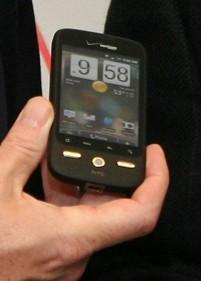