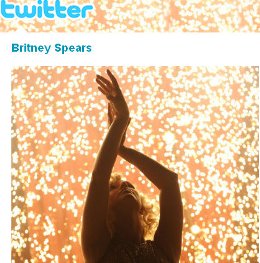 I know some of you have mentioned before that you don’t come to my blog to read about the latest “Britney Spears buzz…”  And I want you to know that I don’t cover Britney Spears on Twitter or on Facebook just to benefit from the buzz effect.

I’m trying to illustrate, educate, or whatever you want to call it… the unprecedented utilization that Twitter and Facebook Fan Pages  provides as a platform for broadcast messaging – for influence – for communicating – for connecting – for announcing!

Britney Spears just so happens to be the one high profile celebrity I follow on Twitter because she has over 3.6 million followers, and also on Facebook because she has another 2.3 million fans!

And more importantly from my perspective, I just can’t comprehend and grasp in my mind, the level of influence that these platforms –  Twitter and Facebook – can have when you’re able to broadcast out to 5.9 million people that actually want to hear from you.

You see, the concept of Twitter is powerful because it has that “permission based” marketing element.  Meaning, no one is following you on Twitter that didn’t “voluntary” follow you.

So the 5.9 million followers that Britney Spears has on Twitter and Facebook are all “voluntary followers” – they are 100% made up of people that decided to follow her, and who actually wants to hear from her!

If you haven’t yet, go ahead and check out her Twitter profile and her Facebook Fan Page.  Observice the 5.9 million fans that she has – check out the updates that she sends out – and then sit back and ponder for a moment the influence that these amazing platforms  (Twitter + Facebook), plus 5.9 million followers, can have, achieve, and accomplish.

Maybe it’s just me, but this goes so much further beyond just following a celebrity just for the sake of catching the latest buzz and gossip!