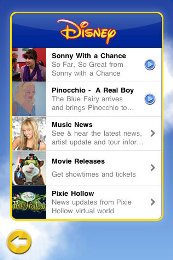 Are you a fan of Disney?  If you have kids (like me) more than likely you are inundated with the Disney Channel.

Well, if couldn’t get enough of Disney as it is, at some point today you should have an iPhone App that you can download as well.

My kids love to play on my iPhone – which might explain why it’s cracked and damaged – and I’m sure the new Disney App would be a hit for them.

Yahoo Tech News wrote a great article about the upcoming Disney App for the iPhone.  And they highlighted a lot of great features you can expect to see.

The primary features, according to Yahoo Tech, are “bonus animations to users who follow clues to take cell-phone pictures of characters from movies such as “Up,” “G-Force,” “Ratatouille,” and “Wall-E” on the Web site.

Taking the correct picture unlocks an exclusive video and downloadable content such as frame images that can be overlaid on photos, or wallpaper images for cell phone screens. Disney is calling the feature “Click2Life,” because it makes characters captured in photos appear to suddenly become animated in one’s hand.” [source: Yahoo Tech]

Jason Davis, vice president of Disney.com, said the main purpose of the app was to deepen fan relationships with Disney characters, rather than just drive traffic to stores, theaters and online.

The Disney iPhone App is free, and is scheduled to be in the iTunes App Store at some point today.