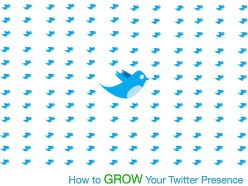 When it comes to Twitter, it’s not easy being popular!  Having more followers on Twitter means more opportunity to network, communicate, promote, and connect to others that can either help you, or that you can help.

Twitter is also a great way to market and promote your products and services.  Don’t believe me, just ask Dell Computers who has generated over $7 million dollars selling used laptops and computers via Twitter.

But getting more followers is no easy task!  Especially because, just like someone can easily follow you, they can just as easily and quickly “un” follow you as well.

Let me quickly show you 3 great ways to get more followers on Twitter!

Up until this month, I never followed any body on Twitter that I didn’t specifically seek out to follow.  I thought, if I could just follow those that I want to follow, then my profile will be much more efficient.

And it was!  The content streaming through my profile was very specific, highly targeted, and very informative.  After all, I was only following those that I wanted to follow, even though other people were following me.

But this month I decided to try something different.  I decided I was going to start following anyone who followed me just because I thought it might be  a nice thing to do.  Within one week of me following those who followed me, I doubled the number of followers on Twitter.  Within a few weeks, I increased the number my number of followers from 600 to well over 1000!

So without question, following those who follow you is probably one of the best things you can do to increase the number of followers you have on Twitter.

When you create content on Twitter that is helpful and informative, people will “retweet” your updates.  This retweeting has amazing traffic and exposure implications because each time someone retweets your update, it exposes you to all of their followers who can then, with one click, follow you!  With just a few people even retweeting your content, you can easily expose your content, and your Twitter profile, to thousands of people.

People will always remember those who help them out, or who find their information valuable.  And when you retweet other people’s content, it’s like giving them a “thumbs up” on the web to all of your followers.

This is more a strategy of Twitter politics, but it certainly works when it comes to increasing the number of followers to your Twitter profile.

And the more you retweet other people’s content, the more of an impression you’re making to your followers, which ultimately increased your brand and reputation on Twitter – which in turn, dramatically increases the number of followers you get on Twitter!

… see how this works?