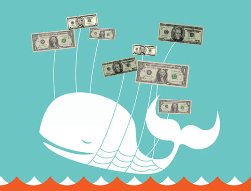 It’s been a number one priority ever since investors started pouring money into Twitter, but now it’s finally a reality!  Bloomberg is reporting that Twitter is now a profitable company thanks to the recent search deals struck by Google, Yahoo, and Microsoft.

Twitter will make $25 million just from the Google and Microsoft deals in 2009, according to Bloomberg.

Twitter CEO Evan Williams said two months ago that the company was spending almost all its time improving the product, rather than seeking ways to make money.

Here’s the numbers from Bloomberg:

“Twitter Inc. will make about $25 million from Internet-search deals with Google Inc. and Microsoft Corp. announced in October, enough to push the site into profitability, people familiar with the matter said.

An agreement that made Twitter’s messages searchable on Google’s site will generate about $15 million, said the people, who asked to remain anonymous because the terms aren’t public. A similar deal with Microsoft’s Bing search engine will earn Twitter about $10 million.

The multiyear agreements will allow Twitter to make a small profit in 2009, said the people, who estimate that its operating costs are about $20 million to $25 million a year. The San Francisco-based company, which started in 2006, has about 105 employees, according to its Web site.”