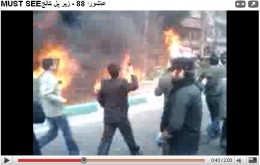 The #iranelection hashtag is flaring up again on Twitter due to a set of protests at the capital in Tehran set to coincide with Ashoura, a day which commemorates the death of a 7th-century saint in Shiite Islam.  The government’s response to the protests has been to strike back with military forces, shooting at protesters and killing at least 4.

Twitter has once again become the main venue for news, video, and photos of the protest in Iran getting out.  Despite the efforts of the government to shut down Twitter and the Internet to prevent this information from getting out.

See video from the Iranian protest below:

With the protest getting out onto the web, and this time with the military striking back and killing at least 4 protesters, the global response will more than likely be strong and decisive against the Iranian government.

The #iranelection hashtag came to be in the days following the heavily contested June elections that swept current-President Mahmoud Ahmadinejad back into power. Ahmadinejad is accused of using voter fraud to steal the election from the rightful winner, Mir Hossein Mousavi.

Here’s the video of the most Iranian protest: