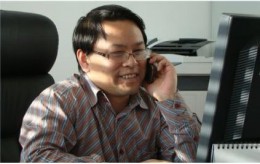 Wu Hao has become the first Chinese official to use Twitter and is setting a new precedence of “openness” in China through the use of social networking and the Internet.  Wu Hao has gained nearly 50,000 followers within the first month of starting his Twitter profile.

** Note – despite searching long and hard, I’ve not yet been able to find Wu Hao’s Twitter profile.  I’m not sure if this is because he is in China, or if the name of the profile is something other than “Wu Hao”.  If someone has a link to his Twitter profile, please share it with us in the comments below, or contact me directly with more information.

It is reported in the China Daily that Wu Hao sends about seven tweets through his mobile phone every day, the youngest deputy director of a provincial publicity department in the country is not afraid of sharing his work, personal life and emotions with strangers.

“Some say I am trying to show off (by using Twitter),” he says. “But we Chinese officials should also show some personality.”

Last month, Wu set up another Twitter account for the Yunnan publicity department for the quick dissemination of government information. The move made Yunnan the first province with a government department using Twitter.

“We opened our Twitter feed to encourage public opinion on social issues. It shows the government’s confidence in making its work more open,” Wu says.

The journalist-turned-publicity official understands well the power of the media, especially that of China’s 380 million Internet users.

As an enthusiastic veteran Web user, he believes in the way advanced information technology can change communication between the government and the public. [source:  China Daily]