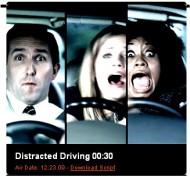 Back in October, President Obama signed an executive order banning all federal employees from text messaging when they are behind the wheel of government vehicles and from texting in their own cars if they use government-issued phones or are on official business.

That executive order that goes live as of today, Wednesday, December 30, 2009 and means that more than 3 million federal workers are prohibited from texting while driving government vehicles.

Hi Gregory – I would be more than happy to write a product review here at Social Media SEO. You can contact me directly at 706-363-0335 or email me at seoscale@gmail.com

Thanks for visiting and commenting!