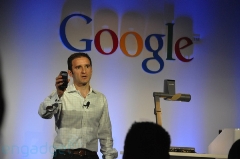 Google’s Nexus One phone has official been announced on stage.

The Google Phone (Nexus One) has been talked about a lot both here on my blog and throughout other sources, but Engadget has confirmed it’s actually being announced on a stage.

“So, the nitty gritty: 3.7-inch AMOLED display, 1GHz Snapdragon processor, compass, GPS, accelerometer, light and proximity sensor, and a multicolored LED under the trackball. There are also two mics onboard for the purpose of noise cancellation, similar to Motorola’s CrystalTalk, and the phone is naturally running the brand new Android 2.1. The phone is actually HTC branded, unlike the pre-release versions we’ve seen.”