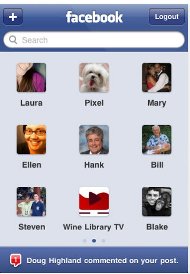 There is a new update released for the Facebook iPhone App called version 3.1.1.

And all I’ve read about it so far is people complaining about how the push notification isn’t working all the time, and how they can’t always comment on pictures, etc…

I think that people – specifically Facebook iPhone App users – don’t quite realize how blessed they really are.

You know, you could be a Blackberry owner that has a very clunky Facebook App, and one that has zero functionality for managing Facebook Fan Pages.

Or you could be one of the many mobile phone users who wish they had an Facebook App, but instead have to access Facebook from their mobile web browser – which is nightmare in itself.

So maybe the Facebook iPhone App version 3.1.1 doesn’t fix every single bug that plagues the iPhone.  What we do have is a leading iPhone App for Facebook that is by far unmatched anywhere else on the market.

And oh yeah… did I mention that the iPhone App is FREE!

That’s probably the biggest reason you all need to stop complaining about it.