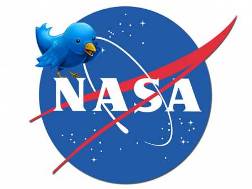 One of the coolest things about Twitter is that anyone, and I mean anyone, can find an audience who is willing to listen – or should I say “follow” – what you are saying.  In fact, the more “niche” or obscure someone is, the seemingly more popular that person can become.  NASA Astronaut Mike Massimino is a great example of how Twitter can build an entire movement around one unsuspecting individual.

Mike Massimino definitely stands out in the Twittersphere!  He has, as of this article, 1,306,565 followers.  And no, he doesn’t use the “I’ll follow you if you follow me” strategy to build his follower list.

How do I know this?  Because he’s only following 10 people!

So over 1.3 million people are following Mike Massimino, yet he is only following 10… yeah, I’d say that Twitter really digs this astronaut!

I might be mistaken, but I believe it's Twitterverse.