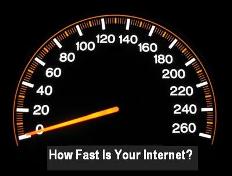 The Federal Government is making it easier for you, the consumer, to test your Internet speed and to verify that you are actually getting what you paid for. The FCC (Federal Communications Commission), has released a new Internet speed testing tool designed to allow you to test, and verify your broadband speed – it can be found at www.BroadBand.gov.

The best way to fully understand the speed you are actually getting is to run the test during different times of the day.  You should run a test during the early morning hours, when Internet traffic is comparatively low.  Then test again during mid afternoon when most people are on the Internet.

According to Yahoo news, during an FCC meeting in September, officials said that actual speeds were estimated to lag by as much as 50 percent during busy hours.

“The FCC’s new digital tools will arm users with real-time information about their broadband connection and the agency with useful data about service across the country,” FCC Chairman Julius Genachowski said in a statement.

The FCC is also collecting information about where broadband is not available. Consumers can email the FCC at fccinfo@fcc.gov or call the FCC.