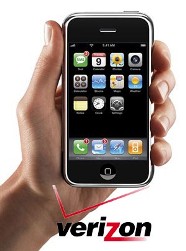 Today, Verizon CEO confirmed that Apple is still working on a compatible iPhone for Verizon’s network.

Even though Verizon has not confirmed an official release date of their iPhone, Verizon CEO Ivan Seidenberg has said that Verizon “wants to carry the iPhone”, and that “Apple is still working on a the design for a compatible version of the iPhone for Verizon’s network.”

It is possible that Apple’s new iPhone OS 4, which will be discussed on Thursday at the Apple new conference, is the design concept needed to make the iPhone compatible with the Verizon network?

Perhaps we’ll even hear an official announcement on Thursday from Apple regarding the Verizon deal.

Regardless, it is now clear that the iPhone is welcome at Verizon and that Apple is working to make that happen. So now it’s really just a matter of time…