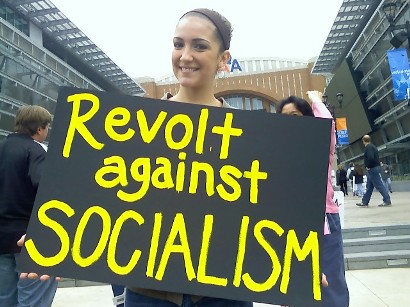 Today’s modern day Tea Party is a made up of a group of fiscal conservatives who are basically sick and tired of excessive government spending.

People started forming the “Tea Party” because, like our ancestors who had Tea Party to protest excessive taxation from Britain, people didn’t believe the government should be using tax payer money to bail out failed financial institutions.

Now we have what you can basically consider the Anti-Tea Party movement called “Crash the Tea Party”.

As you can see from the website, the “Crash the Tea Party” movement is taking a stand against the Tea Party movement.

Why is it that the only info I can find about the “Crash the Party” people is on sites sympathetic to the “Tea Party”? I am wondering whether they really exist–and if they do, why they are wasting their time on behavior that will inevitably bring more support to the “Tea Party.”

Shame, shame, shame on all of those who get to speak ill all because of those who have died
for your right to do so….
We will take back our country…. We the people tell the government what to do!
The people on the left need to get their heads out of the sand before it is to late. And for those
who insist that government knows best – get out of my country. gramma of 5

And all the people on the right need to grow some f**king balls and stop saying no to everything that could potentionally help this country. P.S. All those tea Partiers are a bunch of lazy dead beats who, instead of LOOKING for a job, decide to protest about not having one instead.

i fear a new civil war is a coming

Gramma- this time gramma don’t know best… The goverment are not at the behest of the people. That’s not what Government means. A political party puts out a manifesto and explains it’s policies. The people vote for the party based on their policies. When people start to dictate the policies and the party follows suit to stay popular, THAT is when the lunatics have taken over the asylum. Hence the tea party movement only arising post bush. Where have the conservatives been to scream about over spending in the past 8 years?!! Billions and billions spent over seas on a dubious war for 7 years of bush but when Obama wants to spend money at home on pulling up the healthcare system to modern global standards, the conservatives come out of the woodwork being driven by fox news and rush limbaugh.
All these marches are being described by the rightstream media as anti bailout marches, this is simply untrue. Lies. Flat out lies. They are all being directed at the president and his healthcare reform not at wall street, the bankers and the conservative government who got you into this colosal financial nightmare.

I’ve also seen no real evidence of ‘crash the tea party’ groups. It’s very simple diversive tactics to make the moderate right seem like civil human beings by saying that the loony far right protestors are actually lefty liberals in disguise…
Stop paying attention to the American media, they all have too much to hide. Get out of your bubble and read something unbiased from independent sources. The American media is sooooo far behind the rest of the worlds news sources. Don’t believe everything you read – THINK FOR YOURSELVES!!

Go onto Facebook and look up "The Anti-Tea Party Movement". It's a page designed for this fight.

the tea party started with ron paul continues with rand paul and without robert'bob'bennet,

the tea party started with ron paul continues with rand paul and without robert'bob'bennet,

"The Tea Party" will hopefully find its voice and rise up together, but I fear us Independents will have a very tough struggle ahead of us until the Demos and Reps see the flaws in their system of rule.

I am annoyed by the “tea party”. At their protests, I only see a few people of other races. It gives me the impression that the “tea party” is an extension of the kkk. What is even more annoying is their stance on environmental regulation. In their ignorance, they fail to realize that the United States is several years behind Japan, ENVIRONMENTALLY. In regards to our current economic condition, it really doesn’t matter who was elected into the Oval Office in 2008. Inflation and tax increases are natural symptoms of a recession. Stop blaming Obama, it was Bush II’s fault.

There is no new civil war comin u dunce. The tea party is a bunch of racists who hate Obama and a bunch of hypocrites

Under Carter the Republicans told us that the deficit was going to destroy America.

Reagan doubled it and the Republicans said nothing.

Under Clinton the Republicans told us the deficit was going to destroy America.

Bush II tripled the deficit and the Tea Party said nothing.

Under Obama the Tea Party tells us the deficit will destroy America. And they tell us taxes need to be cut. And military spending needs to be increased. And don’t touch Social Security or Medicare/Medicaid. And we need to follow the Constitution, except for the parts that need amending. The Department of Education needs to be eliminated and sheriffs can overrule federal officials and Obama was born in Africa and Sarah Palin is the smartest woman in America…

You will take back your country? From whom? From those of us who voted for Obama? Sorry, landis, it’s our country too. Your side lost the election. Fair and square. Part of living in a republic is accepting the simple fact that sometimes your side doesn’t win, and that the other side is the legitimately elected government. Even if you don’t like it. We’re here to stay, so get used to it.

Ha ha. It will be the first war where one side goes into battle on their scooters from the Scooter Store, too old and/or fat to march…

Let’s look at some Tea Party facts: #1 The Infamous “Tea Party” was founded by wealthy families and business leaders who are upset that the Obama Administration will not give them any more lavish tax breaks and will hold their Fortune 500 companies accountable for their business ethnics, in addition it, making them report off-shore investments that have been hid from Uncle Sam for decades, while they are still begging for government bail-outs.

Why are businesses complaining about taxes? Interest rates are almost 0? If banks won’t lend to them, is there something wrong with them, or are banks trying to sabotage the economy? I would much rather have a free mortgage than a slightly lower tax. They should look at this first. If banks suddenly start lending in 2011, we’ll know.

Why not spread the word… AIG is too big to fail like the Tea Party has invested too much funny money to lose. You will need a monster vote against all that is Tea Party to take back America from the “monied”.