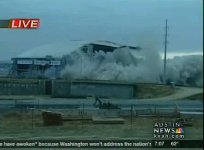 The planned take down of the Texas Stadium happened today and a 10 year old boy was the one that threw the switch to set off the explosions.

One flick of a switch, and that’s all it took to bring down the enormous Texas Stadium were the Dallas Cowboys used to play.

Cowboy Stadium was replaced with a brand new, state of the art stadium located in Arlington, Texas.

The Cowboys had their opening season just this past year in the new Cowboy Stadium.

Of course, to make the whole spectacle a bit more fun, the construction workers went on ahead to invite interested members of the public to watch on as they reduced the well-known landmark to rubble.

Check out the video below for one of the better shots of the implosion shared over YouTube: