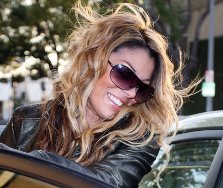 Yesterday I wrote about how Jaimee Grubbs, Tiger Woods’ alleged mistress, was arrested in West Hollywood for driving with a suspended license.

The harsh part of the story is that Jaimee Grubbs was held on $30, 309 bail – now that sounds a bit harsh for being arrested on a suspended license.

Her bail was set at $30, 309, according to the West Hollywood Watch Commander.

This figure includes the fees for two additional warrants that were out for her arrest.