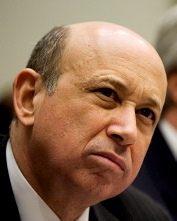 Goldman Sachs (NYSE:GS) may face legal action from German bank IKB IKBG.N and could be pursued by regulators in Germany and Britain after the U.S. investment bank was accused of duping clients.

Deutsche Bank (DBKGn.DE) and UBS (UBSN.VX) led a 2 percent slide across European bank shares on Monday as investors feared regulators will probe deeper into past deals across the industry.

The U.S. Securities and Exchange Commission (SEC) charged Goldman on Friday over its marketing of a subprime mortgage product, igniting a battle between Wall Street’s most powerful bank and the top securities regulator. Goldman has denied the charges.