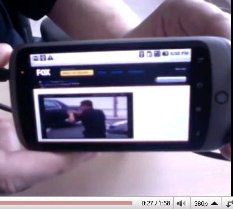 One of the biggest selling points for Google’s Nexus One phone is the fact that it has the ability to run Flash Player 10.1.

Contrary to the iPhone (and Apple, and Steve Jobs, etc…) and the fact that they are adamant about not running Flash because, as Steve Jobs puts it, “it’s too buggy!”

Nonetheless, the Nexus One is proud to be able to run Flash and again, it’s one of the strongest selling points for the mobile device.

Below is a video I recently found that shows off the Flash Player 10.1 capabilities on Google’s Nexus One phone.

Check it out below:

So what do you think about Nexus One and it’s ability to run Flash Player 10.1 – and run flash on the mobile device?

Better yet, do you think Apple is making a big mistake by not running flash on the iPhone, and now the iPad?