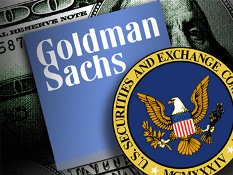 Just when you thought that the accusations against Goldman Sachs were bad, how about the news that’s breaking about the SEC working in tandem to announce their fraud charges in conjunction with a Senate vote on financial regulatory legislation?

Is it possible that The White House, and congressional Democrats schemed up this whole thing – the allegations of fraud against Goldman Sachs – and roped the SEC into the whole thing, all with a political motive of advancing their legislation?

Naw… that would be mean, rude, and down right deceptive by the Democrats!

Wait a minute. Actually, yes, I can very easily see the Democrats trying to pull off something like this – lies, decit, deception, in an effort to advance their own legislation.

According to the Wall Street Journal,

“…a draft of the letter, expected to be sent today, Organizing for America, a spin-off group from President Barack Obama’s campaign, sent an email from the president to millions of supporters after the suit was filed. The message urged “support for ‘Wall Street Reform.” In addition, the Democratic National Committee purchased advertising that would appear whenever a Google user searched for the phrase “Goldman Sachs SEC.” The ad read: “Help Pres. Obama Reform Wall Street and Create Jobs. Families First!” the letter stated.

It was signed by GOP Reps. Issa of California, Jim Jordan of Ohio, Jason Chaffetz of Utah,Patrick McHenry of North Carolina, Dan Burton of Indiana, John Mica of Florida, Blaine Luetkemeyer of Missouri, Aaron Schock of Illinois, and Anh “Joseph” Cao of Louisiana.

“The events of the past five days have fueled legitimate suspicion on the part of the American people that the [SEC] has attempted to assist the White House, the Democratic Party, and Congressional Democrats by timing the suit to coincide with the Senate’s consideration of financial regulatory legislation, or by providing Democrats with advance notice,” Issa says in the letter.”

So why would the Democratic National Committee purchase advertising space on Google for when someone typed “Goldman Sachs SEC”, their ad would appear reading:  “Help Pres. Obama Reform Wall Street and Create Jobs. Families First!”

It’s one thing for the government to bring fraud charges against Goldman Sachs, but it’s an entirely different thing to actually prove these allegations in a court of law.

Just maybe, the entire thing was orchestrated from The White House, through the use of the SEC, to plant seeds of doubt and suspicion into the hearts of the American people.

Seeds of doubt that would build support for the upcoming financial regulatory reform that is about to be debated in the Senate.

So Goldman Sachs is really just a tool in the overall plans of  The White House to gain support for the need for financial reform.

But in this case, it may end up backfiring on The White House and the entire Democratic party.