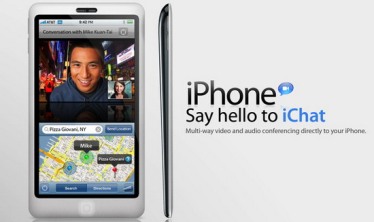 As we saw yesterday in the iPhone 4G video that was leaked from Gizmodo, there is a forward facing camera nicely in place at the top left of the iPhone. Much speculation has been swirling around about the next generation iPhone having a two way video conferencing / chat feature, and from the looks of the video, that’s exactly what Apple is planning on doing.

A 2 way video chat feature on the iPhone would be a great asset to a lot of customers, in a lot of different ways.

One way the iPhone 4G, with 2 way video chat, would compete would be in the business and professional data phone market space.

Currently, the Blackberry dominates that market space, but with a 2 way video chat feature running at 4G speeds, people might consider making the change from a Blackberry.

I’ve always been a little confused why the Blackberry is so popular among business professional? I often think that businesses, and more specifically IT departments, make purchases of new Blackberry’s in bulk, and then sync them with their networks.

This is not to say that the employees who are issued a Blackberry prefer the Blackberry over the iPhone – it’s just that their business issued it to them, so that’s what they have to use.

It honestly wouldn’t surprise me if the majority of company issued Blackberry’s owners actually had their own iPhone in their pockets!

Do you think a 2 way video chat feature on an iPhone would start to take away, or at least start chipping away, at Blackberry’s dominance over the business and professional data phone market space?