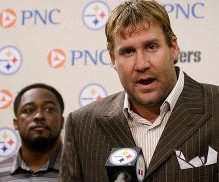 Doesn’t the title of this article sound ridiculous?

Since when, in our justice system, does somebody get away with rape and most importantly, a professional football who’s only penalty is to sit out 4 – 6 games during the regular season.

Have you read the victims police report?

The medical exam after the alleged assault did not provide definitive proof of rape. However, the medical exam did reveal a “cut, bruises and vaginal bleeding,” reports ESPN. Some DNA evidence was seen, but the quantity of it was insufficient to determine who it belonged to.

The statements from the victim’s friend, Nicole Biancofiore, are also proof enough that Ben Roethlisberger committed a crime that night in Milledgeville.

Nicole Biancofiore stated that “(the alleged victim) was dragged by a bodyguard to the back room in Capital. She was extremely intoxicated and not aware of what was happening.”

why is it that ben the rapist rothlisberger gets accused of rape two years in a row and only gets a six game suspension but yet the black nfl players are getting years in jail. Is the nfl as bias as the justice system?

LMAO… Soo true man. The system is all messed up! You cant fight dogs and shoot yourself ..Those are sure fire ways to go to prison.. But if your WHITE.. and wanna rape someone… Meh, no biggie.. There's just not enough proof.. "You cant play a few games Ben.. Sorry"… I'd say its biased haha.

lol its cause theres only a few white guys left

Hey, while I don’t agree with this (even as a Steelers fan), I would say that the bigger atrocity was Ray Lewis plea bargaining out of 3 felonies (murder, aggravated assault and lying to authorities) and a misdemeanor (obstruction of justice), and receiving a $250,000 fine and one year of probation! I’m not saying Ben’s penalty is justified, most especially after this being the THIRD claim; I am saying that Roger Goodell needs to find the back of the unemployment line!