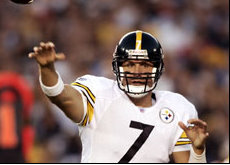 So now the Steelers are looking for a way to potentially trade Roethlisberger and get the bad rap, and the bad publicity out of Pittsburgh.

The Oakland Raiders are apparently stepping up to the plate with a quickness.

According to NFL Network’s Jason La Canfora, the Raiders are in contact with the Steelers about a trade for Ben Roethlisberger.

It wasn’t but a few days ago that there was any talk about a Roethlisberger trade, but now we’ve progressed to where the Raiders are supposedly already stepping up to the plate.

It will be interesting to watch how the Ben Roethlisberger story unfolds, especially now that there are trade talks along with the headlines of sexual assault.