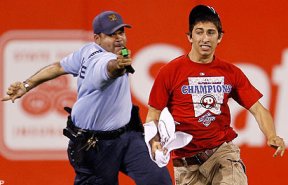 Some people find interesting ways to achieve their 15 seconds of fame in this world. I suppose there are lots of different avenues to take to achieve your moment of fame. Some decide to launch their “fame” campaign when they are old, some while they are young – but more than likely all who cast themselves out into the world to achieve instant fame, typically do so at a cost.

In this case, we are taken to a Philadelphia Phillies baseball game where a 17 year old kid decides to launch himself onto the field, run around like a mad man, and…. well… let’s just say this kid probably wasn’t expecting outcome.

In the video below, you can see the Phillies fan running around the field, and the cop chasing him is frantically trying to get him with his taser gun.

Finally, the kid makes a wrong turn and gets zapped by the taser straight up!