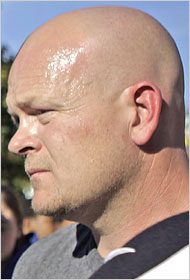 Samuel “Joe” Wurzelbacher, better known as “Joe The Plumber” – has won one of nearly 400 seats on the local Republican Party committee in Ohio’s Lucas County.  Wurzelbacher won the seat by a 38-24 vote Tuesday in his suburban Toledo precinct.

He became an overnight sensation almost two years ago after questioning then Sen. Barack Obama on the campaign trail about Obama’s economic policies and after GOP presidential candidate, John McCain, repeatedly cited “Joe the Plumber” in a debate. He was held up by the GOP as an example of the middle-class worker who would be hurt economically by an Obama presidency.

He has resisted calls to run for Congress and has criticized Democrats and Republicans alike.  Wurzelbacher has since written a book in which he has taken shots at McCain, stating that he did not want him as the GOP presidential nominee.  He has never been shy about sharing his views even if they open him up to critics.  In Cincinnati he drew cheers at a tea party rally when he told the crowd not to let “a bunch of liberal pansies” take away their rights.

One of  “Joe the Plumber’s” accomplishments since the presidential campaign was to spend a few weeks as a war correspondent in the Gaza Strip.

One reply on “Joe the Plumber Elected to Party Office”

Joe the plumber? Since when? It’s very scary when the more you lie, rewards are abounding. He is certainly not a plumber and he did nothing but lie to the media during the election process of 2008. Of course, that fits right into the Palin movement (and I use the word “movement” loosely) with fear tactics and disgusting, vile accusations being thrown out to an already misinformed public. Take Newt, Palin the “Failin” and ask yourselves how you like being at war, giving the rich yet another two yrs. of tax breaks and completely dissolving what is left of the middle class. How gullible the public can be. Beware of anyone who evokes the name of God to justify their personal agenda.