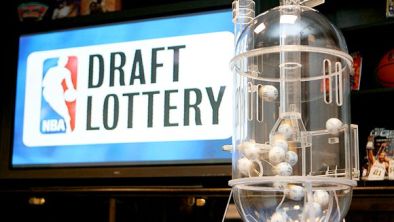 The New Jersey Nets are certainly hoping that they can win the No. 1 pick in the 2010 NBA Draft, coming with it a possible elite player from this draft class. They certainly have the best chance at winning the 2010 NBA DraftLottery, but if history has anything to say about this lottery, the worst team doesn’t always get the first pick through the lottery drawing.

Could we be in for a shocking team getting that No. 1 pick?

The excitement could create drama all the way up until the NBA Draft finally takes place.

The NBA Draft Lottery odds are determined based on the record of each team this past season. From there each team that didn’t make the NBA Playoffs is assigned a certain number of ping pong balls that will go into the lottery.

There are 1,000 ping pong balls in total, and as the worst team in the NBA, the New Jersey Nets will gets 250 (25%) of the balls. At the end of the article we listed the 2010 NBA Draft Lottery odds, and it shows that quite a few teams could walk away with one of the top picks.

One potential steal could be if the Utah Jazzended up getting the No. 1 overall pick, because they own the rights to the New York Knicks 2010 NBA Draft pick.

This will all lead into Game 2 of the Boston vs. Orlando series, and could provide a lot of excitement for the NBA tonight. Will there be a surprise in the 2010 NBA Draft Lottery? Or are we looking at something that will just go through the motions to determine who will be selecting in the top three choices at the 2010 NBA Draft this summer.

The first three picks are the lottery choices, as the draft will fall into order of worst to best record after that point. It means that New Jersey will at worst have the fourth pick in the draft. Tune in to ESPN tonight (Tuesday, May 18th) to be one of the first time find out how this is going to go.