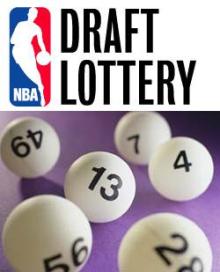 The Washington Wizards get the first pick in the 2010 NBA Draft order followed by the Philadelphia 76’ers and coming in third is the New Jersey Nets.

The remaining 2010 NBA Draft order will follow the 2009 – 2010 NBA regular season record. This is where the NBA Draft gets interesting as a number of trades will start to emerge across the NBA teams.

Already, a number a draft picks have been traded even prior to the 2010 NBA Draft Lottery that took place last night. And those trades that have already been made are accounted for in the 2010 NBA first round draft order below:

I think this was paid for they cheated.Washington was suppose to be third….. This sucks

Seriously you mean to tell me that the worst team in history can't get the 1st pick?Woooooow the Wizards????I demand a do-over!!!!!!ASAP!!!!!!!

How come New York Knicks is not on the list.