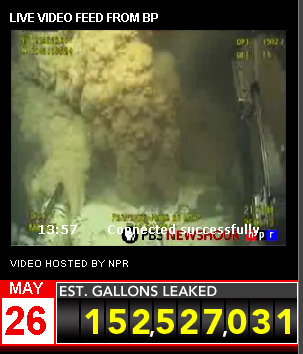 Well, we now know that BP’s Top Kill procedure failed to stop the spewing oil from their oil pipe 5000 feet deep in the ocean floor. BP did not make any guarantees that the Top Kill procedure would work, and the BP CEO was very clear on the point. The procedure was risky and dangerous – what procedure won’t be at those depth levels.

BP is now getting reading for their 3rd attempt at stopping the oil leak with a procedure they call Marine Cap.

The latest procedure involves slicing off the leaking pipe at the top of the well’s broken blow-out preventer, placing a cap over the leak and channeling the captured oil and gas to a vessel on the surface. BP officials said the procedure could take from four days to a week, and it already has two different caps on the ocean floor, ready to be deployed.

BP didn’t try this approach sooner because it feared the kinks in the pipe still attached to the blowout preventer were acting as a choke on the leak. Removing the pipe could lead to a more violent surge of oil.

Carol Browner, White House Energy and Climate Change Advisor, said Sunday on CBS’s “Face the Nation” that the flow of oil could temporarily increase by 20% before the new device is put in place, according to The Wall Street Journal.

Perhaps the most perplexing aspect of this whole thing is that BP’s live oil feed is not showing any oil spewing out from a pipe like we saw before. I’m wondering if BP has purposely shut off the live video feed that shows the spewing oil from the pipe?

Perhaps BP made the oil leak worse when they attempted the Top Kill procedure, and now they don’t want to show the actual pipe anymore.

Why are they continually trying to ‘channel the captured oil and gas to a vessel on the surface’? Why don’t they just seal it and be done with it. Are they trying to continue to profit from this disaster? Surely trying to cap it and still maintain its viability as a source of revenue are at odds with each other or at least slowing down the stoppage of the spill.

Perhapse, “tiny martians are in view and BP is trying to save them”….My point is that your assumption is as valid as my insane statement. Shit happens, but if BP did something intentionally to short cut the safety process they need to be hung out to dry.

What other company that screwed up put a live feed out of their disaster? I’m going to give BP some slack.

We need oil, sometimes accidents can occur. The perfection that you expect, does not exist anywhere I know of.

If you are a petrolium expert for spills at this ocean depth sound out. otherwise STFU

.
.
.
the TRUE REALITY of facts is that…
.
BP wants only to save its OIL and the WELLHEAD rather than save the Gulf’s SEA…
.
the US government don’t take control of the crisis to leave the entire responsibility on the BP’s head…
.
all websites, newspapers and TVs Press want a very long Gulf crisis to have a war-like “top story” to talk about for many months more…
.
the environmentalists are very happy to see a long and giant disaster in the Gulf because it’s big and free advertising in support of their thesis against the oil and in favour of renewable energy sources…
.
that’s the reasons why NO ONE of them wants to adopt, use, suggest, impose, promote, review, talk about the MANY simpler, cheaper and FASTER ways to STOP the oil spill in a few DAYS, like (e.g.) these:
.

Obviously you are as big an idiot as the guy with all the answers on the web page link you posted. To try to put a heavy weight on the pipe would accomplish only two things. More time wasted and now a pipe buried in the mud of the gulf’s floor. To stick a rubber conical cone plug in, are ya retarded, or even to use a ballon. With that much oil gushing out do you really think a ballon would have a shadow of a chance of blowing up or even holding before it was shredded?

BP sounds like they are trying to do what ever they can and are spending millions if not over a billion now on trying to “contain” this disaster while the ones really at fault, the drilling company is only worried about moving the legal stuff to Texas so they wont have to pay. Get a clue!

I live down here. I am effected by all this. And like most of us down here are sick and tired of clueless people chirping in with no idea at all of what they are talking about.

I believe it its not oboma’s fault and you shouldn’t be blaming him. blame BP

BP has continually deceived us from the beginning and will continue to do so throughtout the whole process.Tony Hayward has deceived us on how much oil is leaking, the processes, the workers getting ill from the fumes of oil and chemical dispersants, the wildlife impact, and pretty much everything else from the beginning. Now he is denying that there are underwater oil plumes when their is underwater video from divers showing oil in the water columns, numerous scientists have found numerous underwater plumes but Tony Hayward says they have found no oil plumes underwater. Why would anybody believe Tony and BP considering they have been proved wrong on almost all the false information they are trying to give everyone so far? I assume they are messing with the live feed also to deceive us. Just another example of the ongoing cover-up from BP. Tony you might want to stop talking to the media trying to downplay this catastrophy because I believe you have enough *hit on your face already.

I everyone, I posted an idea to stem the oil leak through the Deepwater well head at:

The idea involves tappling lines through failed ram ports and siphoning oil, then attempting to re-activate the rams higher up – now under lower pressure. Contingency is to close temporarily close off one line, creating a through cross-flow then insert junk shot that stands a better chance of plugging the leak to enable damaged riser removal and cement dump.

@Randy R.
To say that this is any less than an environmental catastrophe is just plain wrong. However, to say that BP is not doing their best is also just plain wrong. As an engineer of 20+ years experience, I can tell you that what has happened is extremely unusual and rare – which still does not make it any less serious. To answer the question, collecting the oil is environmentally sound. The risk that BP is continually running is doing something to damage what is left of well control equipment at the seabed. This includes relatively shallow-set pipe (called surface casing). At some point, they hope to cap and seal this thing, and that shallow-set pipe has to have pressure integrity.

ya buy a hummr! you dopes!

This is so mind blowing!If we keep taking from the center of our planet,Its going to keep caving in.Not sure how too plan my kids futures,My kids and I love the ocean,fishing,swimming and sometimes just looking at it. I don't want to return to work(oil refinery)but its the only thing I know! Life might not be as long as we all thought. Sorry just venting.