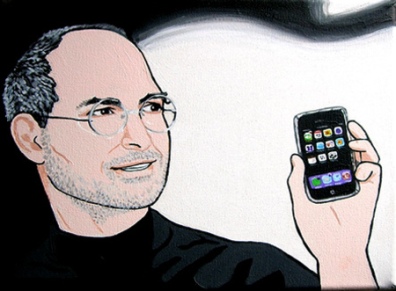 In about 5 days, Steve Jobs will take the take the stage at WWDC2010 – do you expect to hear what everyone else is expecting?  Will Steve Jobs announce the iPhone 4G, and perhaps even a Verizon iPhone?

Apple (Steve Jobs) has this amazing knack for getting the world to buzz and blog about anything and everything Apple. From the very first iPhone announcement, to the latest iPad release, Apple has precluded both with nothing short of spectacular marketing, press releases, buzz affect, and simply getting people to talk.

So as it is, the World Wide Developer’s Conference is coming up on Monday, June 7th – about 5 days from now. And it is already announced that Steve Jobs will be opening the WWDC with a keynote speech.

This keynote is also widely expected to include the news about an iPhone 4G release date, or the next generation iPhone as some people are referring to it.

I’m thinking that Apple is at a point where it MUST expand the iPhone market base beyond just AT&T, and I’m fully expecting Steve Jobs to at least announce a Verizon iPhone, or a Verizon iPhone expansion plan, along with perhaps even other carriers such as a Sprint iPhone, etc…

Do you expect Steve Jobs to announce the next generation iPhone (iPhone 4G) at the up coming WWDC?

Do you think that Apple is ready to expand the iPhone market beyond AT&T to other carriers such as Verizon, Spring, and others?

I think there will be an iphone 3g soon

WOW really what rock do u live under…. this is the 4g era my friend get w the program

Oh my gosh, maybe even an iphone 2g! That would be something

It is already known information that Apple and ATT have extended there aggreement. This Blog SUCKS

att sucks, i don't plan on buying another iphone until verizon gets one!
apple has really ripped off their customers!!!

did i tell you that att really sucks!!!

If people were honest with themselves they would admit that they hate ATT because they have the iPhone. I wasn't crazy about ATT years ago, but this second time around I have been with them for almost 3 years and have been really been impressed.
I have a family plan with ATT, 5 phones and pay 199.00 per month including my iPhone! That is really great! Everyone deserves a second chance.
Cursing or calling each other's names doesn't change the fact that ATT is the largest cell phone company in the world and they have the coolest, best phone ever…the iPhone, thanks to Apple of course! No one is ever going to top the iPhone…many have tried!
Have a good night everyone and God bless you all.

Liz- I live in southern Indiana… I don't use AT&T because the signal stinks. My business associate and I do a lot of driving around the southern half of the state and after working together for a year she switched to Verizon because I rarely had no signal while she quite often had to drive to a certain spot and pull over to keep a signal or just use my phone.

I've considered switching, but since my job means being on-call 24/7 48 weeks out of the year, I need a dependable signal and that means Verizon.

If Apple won't offer the iPhone via Verizon, I guess I'll have to go with the Droid.