Maytag recalls 1.7 million dishwashers over fire hazard.
The company has received 12 reports of electrical failures in the dishwasher heating element that led to fires and damage. One kitchen fire caused extensive damage, the agency said. No injuries have been reported. 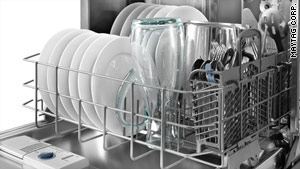 The recall includes Maytag, Amana, Jenn-Air, Admiral, Magic Chef, Performa by Maytag and Crosley brand dishwashers with plastic tubs. The recalled dishwashers were made with black, bisque, white, silver and stainless steel front panels and sold at department and appliance stores nationwide from February 2006 through April 2010. They cost between $250 and $900.
Consumers are urged to immediately stop using the recalled dishwashers and disconnect the electric supply by shutting off the circuit breaker. They can schedule a free in-home repair or receive a rebate of $150 or $250 toward the purchase of select new Maytag dishwashers. The amount of the rebate depends on the type of model to be purchased.

A company spokeswoman says they set aside $75 million to cover the costs of the recall.

Information on the numerous serial numbers involved in the recall can be found at the company’s website or the website for the Consumer Product Safety Commission.

The recall is Maytag’s second of more than a million major appliances in a little more than a year. It recalled 1.6 million refrigerators because of fire risks in March 2009.