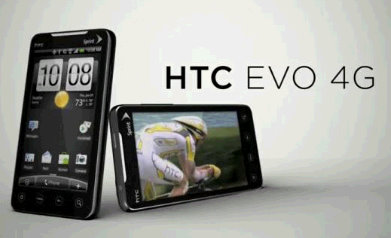 There are news reports of stores not being able to keep up with the demand for the new release of the HTC EVO 4G.

Sprint’s release date for the hot new mobile phone was Friday, June 4th. People were reported camping outside some Sprint stores at 4:30am on Friday just so they could get their hands on one of the first HTC EVO 4G’s.

As people rushed into the stores on Friday to swipe up their new HTC EVO 4G, the high level of demand has been keeping pace throughout the weekend. Now, on Sunday, stores are reporting that they have actually ran out of inventory of HTC EVO 4G’s.

No need to worry though, it won’t take until about tomorrow morning, or maybe even late tonight, for some of these stores to replenish their supply and keep Sprint customers coming back for more of the HTC EVO 4G.

All of this news about the release and sale of the HTC EVO 4G come only days before Apple’s WWDC2010 conference where Steve Jobs is expected to announce a 4th generation iPhone – or as some people are calling it, the iPhone 4G.

One thing is clear, the high speed data phone market is getting intense and I would have to recommend that Apple expand their iPhone carrier from AT&T to Verizon sooner rather than later. At a certain point in the not too distant future, Google’s Android powered phones – like the HTC EVO 4G – are going to take over simply because they are accessible on multiple phone carriers.

Android doesn't have a chance to catch up to apple. android only holds 8% of the market while apple holds 35% good luck closing that gap android

You must not have read the article where Droid will take over the market if Apple doesn't open up service/sales on other networks. The EVO is far superior to the 3G iphone, but I will give the 4G iphone a definite chance as it will certainly be a match for the EVO.

1 iphone on 1 network or 1 droid on Multiple networks?

hey you shut up keith. You dont know what your talking about. I had the iphone 3gs and switched to sprint just to get the evo htc. That phone is amazing. it blows the iphone out the water.. Plus even with the new iphone probably coming on june 7 there is no way its going to compare to the htc. For sure there wont be moving wallpaper in the backround, and most definelty not a 4 g network.

AT&T doesn't need to trick you into a 4G marketing scheme because their 3G network is expandable with only software upgrades because they were the smart ones and went with a GSM network. I don't know about you but I would rather have a phone thats actually phone size. Your flat screen TV EVO can easily be replaced with the iPad. I want a cell phone… Just wait for the new iPhone bc it will blow your oversized POS EVO outta the water! I'm interested to find out how much it will lag in the coming months…..

4.3 inch screen is amazing to.

It's not about luck, it's about a very well thought out design with tons of flexibility with customization. The generation of people who can afford toys like these are the same demographics that Android has cleverly designed their products to meet the needs of – customization is basically what it's all about. Sure, the iPhone has really cool features and it was one of the best designs on the market when it first launched but the ease of use and flexibility of the Android products along with the significantly better carrier technology, it's going to be a showdown!!

android will kill iphone in the long run.bye bye apple

apple might very well have 35% of the market but after how long (years)? the 8% android is holding is within a short time and that is growing at a very fast pace. Given the multiple carriers as well as manufacturers supporting android i will be very surprised if android doesn't take over apple's market share. So Keith, relax and accept reality.

I have to say I have the Evo 4g and it is awesome.There is no phone I repeat no phone out there to do what this phone does.The Iphone does not have a 1ghz snapdragon processor and that is for starters.I will not even go there.I will tell Iphone people you will want to throw that phone away to get this Htc Evo 4g Is like old news when you see t his phone.Far as I see it the Iphone is a pager now to what this phone is to any other phone Out there period!! I want get into the arguments I just tell you this Get the phone and find someone who has it and run it by the Iphone and tell me what you think. I bet you think twice after you see it.That thing does anything.I cant beleive what this phone does I am a computer tech and i still cant figure out everything on this phone. Iphone is a pager to this phone right now,this phone is so advance its unreal. I will stake my phone on here right now.If any phone on in this world can add up to what this phone can do I will give them my phone for free and hand it over to them!!! Thats a promise.But like I said there is none so I would not have to do that.Thanks sprint you finally done something right for the people!

you form sentences with the skill of a 12 year old