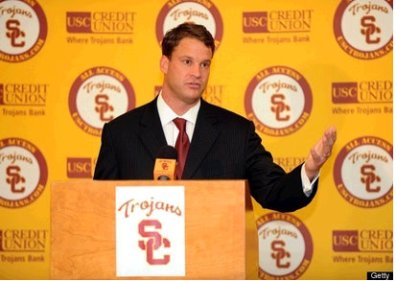 Wow, how about this for some unfortunate and unforeseen events. Lane Kiffin, the previous head coach at Tennessee, left Tennessee to head to the big lights and big money at USC in sunny southern California.

His departure from Tennessee was not very welcomed by the UT community, alumni, boosters, and football players – in fact, he became both a target and a laughing stock of the entire SEC.

Who can forget the Lane Kiffin press conference drama (video)

Well, Lane Kiffin had just recently got his dream job – head coach of one of the biggest and brightest football programs in all of college football, if not the biggest.

No sooner does Lane Kiffin show up to start his dream job, coaching the dream team of college football, right in the middle of dreamy Los Angeles, does the USC athletic department (including the football program) get hit with what I believe is the hardest NCAA penalties in the history of college football.

And the one penalty that hits Lane Kiffin right where it hurts the most?

A 2 year ban from all post season bowl games….  OUCH!

Here’s a complete list of the USC Football Sanctions

♦ Vacation of all football wins, including football bowl games, from the 2004 and 2005 seasons.

♦ Vacation of all basketball wins in the 2007-08 season, including the NCAA tournament. (self-imposed)

♦ Vacation of all wins in women’s tennis between November 2006 and May 2009.(self-imposed)

♦ Reduction of football scholarships by 10 for the next three academic years.

♦ Remittance of the $206,200 the university received for its participation in the 2008 NCAA basketball tournament. (self-imposed).

♦ Release of three men’s basketball recruits from their letters of intent. (self-imposed).