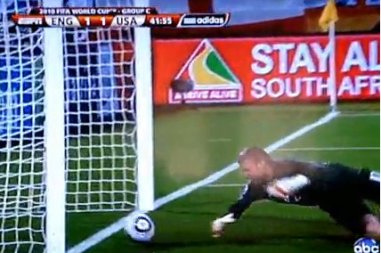 This was definitely not in England’s playbook. England, a favorite to reach the final rounds in the 2010 World Cup, was just tied by the Unites States (USA) in a 1 – 1 match in South Africa.

During the 2nd quarter of the soccer match, USA’s goalie took a pair of cleats directly to the chest from an England player and had to be replaced. The new goalie for USA was able to come into the game and hold off England’s attack from producing any more goals.

For the USA to tie England in this World Cup opener definitely falls into the category of an upset, and from the looks of today’s game, the USA team is ready to fight.

USA’s next game is Friday, June 18th against Slovenia at 9:30am Johannesburg, South Africa time – which is 3:30 am New York time.