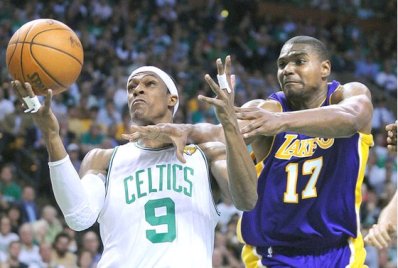 Apparently after you play the Lakers enough, and watch enough film, then you start to see a pattern emerge. And that pattern is that Kobe Bryant is the dominant force in the overall scoring of the Los Angeles Lakers.

I guess this is really something that we all knew.

But being the Boston Celtics, and preparing for the critical game 5 of the NBA finals, there was only one formidable strategy to follow – and that was to force Kobe Bryant to work for every point. And by focusing almost exclusively on Kobe Bryant to stop his scoring, then that would leave it up to the rest of the Lakers team to carry the weight.

Which means ultimately that the Boston Celtics’ strategy worked. And in fact, not only did their strategy work last night in defeating the Los Angeles Lakers, but the strategy is more than likely to work each and every night a team takes the court with the Lakers.

If the opposing team is capable of shutting down Kobe Bryant, or at least making him work tirelessly for every shot he takes and every point he scores, then the Lakers just are not able to run away with the game.

And you better believe that the Boston Celtics are going to come into The Staples Center tomorrow night for game 6 with the exact same strategy in hand – shut down Kobe Bryant, and more than likely you’ll win the game.

It will be interesting to see if the Los Angeles Lakers actually go down in game 6 tomorrow night!