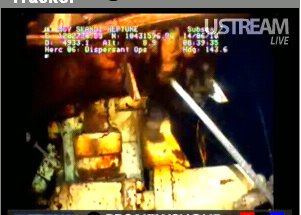 The rumors of BP suspending their stock dividend are growing as the oil continues to gush from the broken BP oil pipe, and President Barack Obama relates the crisis to that of 9/11.

As you can tell from the BP live oil feed video below, it appears that BP is capturing more of the gushing oil from the broken pipe. The amount of oil being collected from the gushing oil pipe is increasing as BP today announced that:

“The lower marine riser package (LMRP) containment cap, installed on June 3, continues to collect oil and gas flowing from the MC252 well and transport them to the Discoverer Enterprise drillship on the surface.

President Barack Obama said in a White House interview by Politico that the BP oil spill is comparable to the September 11 attacks on the World Trade Center as it relates to the impact that it is having on our nation.

The President said that, when looking at the fact that the BP oil spill crisis came out of nowhere, and was unexpected, and that the crisis will have a long term impact on our country – long after the crisis has passed – these events are comparable to the 9/11 attacks.

“I think he’s off-base,” said ex-FDNY Deputy Chief Jim Riches, whose son died at the World Trade Center. “These were terrorist attacks, these 9/11 murders, not something caused by people trying to make money” – according to the NYDailyNews.com.

Will BP Suspend their stock dividend

Finally, it is being discussed on CNBC this morning that BP is apt to suspend their stock dividend. The cost, and the global impact of the oil spill, is having a dramatic impact on BP’s bottom line. And obviously, this is literally billions of dollars that BP was not expecting to pay out.

The BP suspension of their dividend is not expected to happen today.

the problem is that BP or horizon engineering reviewers are to hard headed or to slow,UNITED STATES E.P.A. must step in and resolve the problem

and what the hell does the EPA know about oil well, they are the ones who is screwing everthing up in the clean up process

Oh that right Obama has all this under control, HA HA, if the GOVERMENT we have today can not handle this how are they suppose to handle the healthcare of the US. Thats right they can't look at the Post Office, and DMV, Social Security is about brook.

As soon as the oil leak gets fixed, Obama will be the first to take credit for getting it fixed. He's a joke!

How about use fire to burn all oil around the gulf and start a new marine sea over there. All BP need is a condom that can cover the head (like penis head) to prevent oil ( sperm) from bursting out….

This pipe suffered an explosion that blew the top off of it. It is likely that other parts of the pipe were overstressed during the explosion as well. If you "stop" the oil flow by plugging up the top it seems pretty likely that the pressure will blow through the weakened pipe someplace else. If it does this then we are unlikely to be able to anything else useful until the relief wells complete. Better to collect the oil into pipes and send it to ships on the surface – which is exactly what is happening now. As best I can understand they are now collecting as much as the surface ship can handle. A second ship is on its way that will almost double the surface ship capacity to process the oil coming to the surface. I hope that is enough to collect what is coming out.

It is hard to believe that BP has a solution in hand but for some reason won't deploy it. I can think of no motive for BP to delay implementing any solution they think will work.

Absolutely this is worse then 911 on our economy and habitat. We may need to decide what type of world we want to live in…a world with a lot of cars and cheap gasoline or a world with no beaches to swim in..fish, birds, ….and you have to wonder as to the long term effects in the form of even climate change if rich oil companies and our govt does not get their act together…seems to me that all of the oil companies should be lending their expertise to a solution and not just BP which has already shown it is pretty inept.

"And the second angel poured out his vial upon the sea; and it became as the blood of a dead man: and every living soul died in the sea." Revelation 16:3

I hope this is a wakeup call for any American still believing we do not need to accelerate our research and production for non-fossil fuel energy technologies. The fact that most every large company asked their field offices to maintain a contingency plan in case of an emergency, including natural disasters, is common place in the 21st century business landscape. The point being; it is unfathomable that BP, and the oil industry as a whole, does not have a contingency plan to deal with “any scale” of oil leakage or man made disaster. The fact that BP representatives indicate emergency technology hasn’t yet been developed because there has never been a spill of this magnitude is, well… severely incompetent! If WE let the oil industry off the hook with that statement without accountability, well… WE are to blame.

The human and animal death toll, due to the extraction of fossil fuels from the earth, will continue to rise as long as “WE THE CONSUMER” are naive enough to think we don’t play a part in these disasters. That’s right, stand up and take your portion of the blame. After all, it is “WE” who create the demand which allow these companies to operate their businesses irresponsibly. Ask yourself, did you know who was accountable for running the checks and balances on this industry before this disaster happened? I sure didn't know, but I sure know now. We have the right to expect our President, and other elected officials, to do their jobs and make the right decisions to execute the appropriate change to offshore drilling laws/policies/practices to ensure this never happens again.
BP, get this leak stopped!!

BP tied lines into the seafloor BOP's of the well blowing out in the Gulf well over 2 weeks ago. One would think that the first thing they would have done is flow the well up that piping to gather information needed to determine what would be necessary to stop the flow out the top of the Bop's. They could have gotten a very good idea of flow rate uu this, pipe the flowing pressure at the BOP's, and the flow rate out the top of the BOP's. A multiple flow rate test would have given information that would allowed the design of all equipment needed to produce the well as well as shut off the riser that was leaking the oil into the Gulf. I have wondered from the first why this was not done. The top kill attempt and the cutting of the riser upstream of the bend right at the top of the BOP's would have been avoided. None of the things that have been done to this point would have been necessary to stop the flow.

I saw David Axlerod on television this morning saying they have some outside group working on this and the government is telling BP what to do. This problem while complicated is much simpler than it is being treated. Basic petroleum engineering can easily give a solution and the mechanical design is likely not nearly as complicated as what has been done. I would very much appriciate a reply to this e-mail as I have comments to many places and have not had any replies.

Something just doesent seem right about this oil spill…. why was it not fixed right away ? why is it still just as bad as it was ? why do we need to know how much oil has leaked out? maby someone just just stop it, block it, cap it or something. lets stop counting the days and do something about it . my geuss is that this is a scam and prices of everything is going to go up so that this wonderfull government will make money . SOMETHING JUST DOESENT SEEM RIGHT !!!!

I cant believe some people want to blame the goverment and the president for anything that happens. The same people that say too much regulations and goverment in our lives?
Talk about hypocrites!
The president mobilized more resources in the 1st 48 hrs then any president has in history in response to a disaster!
This is horrible and it is BP's fault period.
They lied to everyone about thier safety procedures and now they are still lying to everyone.
Now they are not able to plug the pipe and made it worst when they cut it.
I hope BP officials see some jail time when this goes to court!
This is the worst thing I have seen in my 50 yrs on this earth.
Lets all pray that someone figures out how to stop this and our coasts arent ruined before then.
Blaming the president is not the answer in fact deregulation during the last president's reign is more to blame than this president response.
geez!!

Well, I was looking for some intelligent comments regarding the situation, but I guess I'll have to keep looking. I'm pretty disappointed to read that all of the comments in this blog are blaming bureaucrats for acting like themselves, and businesses for trying to make money – even when it comes at such an obvious cost to safety. If you didn't expect either of those things – please report back to your nearest asylum. If we don't want to receive the repercussions of bad people, then I suppose someday we might discontinue our unwaivering support of them. But, that would require that we change ourselves.

I'm not inclined to worry about who is to blame at this point. The oil continues to flow. I can't imagine that BP is not doing everything it can to take care of this situation because it is hitting them in the pocketbook through bad PR, and through lost revenue, and expenditures on containment and later cleanup. What would they possibly stand to gain by not doing everything they can to fix the problem? And for those who want to politicize this, if you can blame Bush for Katrina, why not blame Obama for the Gulf spill?

It takes new technology. To fix an unsolvable problem. The whatfor valve. Basic, yet unique. Just sleel and solid rubber. One movement one pipe slides inside the other. First to use the iol flow it's self to seal. A valve to hold that pressure, and the whole time the flow of oil continues. All by moveing one pipe through the other. No moveing parts. Safe cheap. easy. youtube " essendonsinvention ".

Obama compares the BP oil spill with 9/11, I compare Hiroshima & the invasion of Iraq with 9/11 – both were acts of terrorism. I compare the BP oil spill with the Exxon Valdez & Tory Canyon disasters. Am I correct in thinking that the USA was culpable for these disasters? BP are doing all they can to sort this out and have promised that all who suffer will be compensated. I'd hoped Obama would be more intelligent than this.

I see the worlds most ignorant people attach the Presidents name to their own issues. Look in the mirror and say this 'I will not have any offsprings because I'm an idiot'

I see the world's most ignorant people attach the President's name to their own issues. Look in the mirror and say this "I now know where to put an apostrophe".