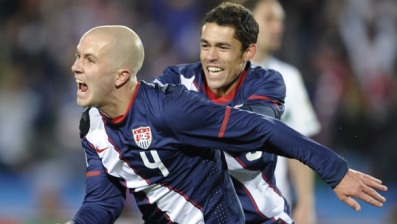 The USA soccer teamed played Slovenia today in a match that was exciting to watch, while simultaneously frustrating from the USA side. A score late in the soccer match by the United States was taken away from the USA soccer team because of a controversial call from the referee. This goal by the USA would have put them up 3-2 against Slovenia and given the US team a “Win” instead of a “Tie”.

However, the call stood and USA soccer team ended the match against Slovenia in a 2-2 tie.

Anything can happen in the FIFA World Cup and even though the USA soccer team is not expected to go very far, we could see things unfold very differently than expected.

We we're so robbed. The entire game the ref pulled some questionable calls. Why on Earth did they employ a novice to be a ref in the WORLD CUP?!

Why in something so important to every nation in it., Don't they have a panel of judges to watch a replay of Question calls and overturn them,I say the whole world is jealous of us and are out to who do us anyway they can, So I say as an american bring it on.

I don't think a muslim referee should be calling a game that the United States is playing in.

Flood FIFA with your thoughts!!

Talking points:
– Need some type of video replay (year is 2010)
– Ref should have to give some type of explanation for decision (any other profession would be held to this standard)
– If ref is reputed to be bad – yellow cards given out during that game erased, and USA should receive formal apology from ref for destroying one of the greatest come from behind wins in all of US soccer history.