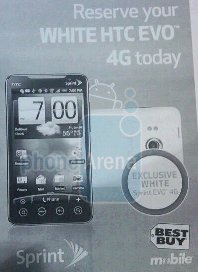 According to Fortune, Sprint’s HTC EVO 4G will be coming in White.

The white HTC EVO 4G is expected to be a Best Buy Mobile exclusive until August, and orders are supposed to begin today.

Pricing is expected to be the same, $199 with a two-year Sprint 4G plan.

Should Apple be worried?

Of course, I don’t know for sure if this was Apple’s purpose or not.

But with a white HTC EVO 4G coming to market shortly (expected availability for pre order is July 11th via Best Buy Mobile), then perhaps people will eject from the pursuit of a new white iPhone 4 and instead take the easier route of getting a white HTC EVO 4G?

Even though Apple might be trying to create an artificial supply / demand constraint, the HTC EVO 4G is ready to step in and offer consumers an alternative to Apple’s supply games – especially with the white iPhone 4.

I find this all ironic because wasn’t it the white iPhone 3GS that Apple couldn’t give away?