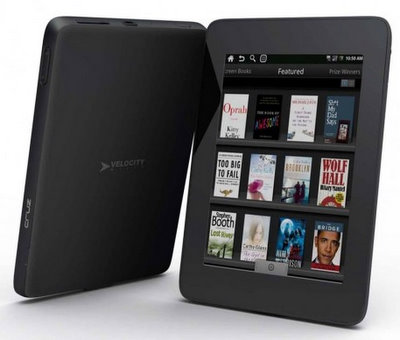 Velocity Micro has just announced a new lineup of tablets that are set to target niche markets such as e-readers, standard tablets, and kids. The Android Cruz StoryPad tablet for kids is a great idea, and features include apps that will help children to read, count, do math, etc…

Although Apple’s iPad has defined the tablet marketplace, I think there is a lot of room for niche markets under the tablet umbrella – and tablets for kids is a great place to start.

From the Velocity Micro press release, here’s more info about the Cruz StoryPad for kids:

The StoryPad comes in a drop resistant package, letting children read, learn, and interact using a simple and intuitive touch interface. Features include:

“Since 1992, Velocity Micro has been dedicated to building remarkable consumer electronics,” said Randy Copeland, President and CEO of Velocity Micro. “With the development of the Cruz line, we were able to take those enthusiast sensibilities and package them for the mainstream consumer to create a product that’s not only amazing, but affordable as well.”

At under one pound and about a half inch thick, the $199, 7” Cruz Reader goes everywhere you do, making it perfect for students, avid readers, frequent flyers, and techies. Additional features such as video playback and web browsing provide a much richer experience than traditional e-ink readers at a more reasonable price than a tablet.

Key specs and features include:

At $299, the Cruz Tablet offers a truly mobile experience at an affordable price, finally giving consumers an Android-based tablet alternative.

Spec and feature upgrades include:

The Cruz Reader and Cruz StoryPad will be available from most major retailers and direct from Velocity Micro in August with the Cruz Tablet following on September 1st.