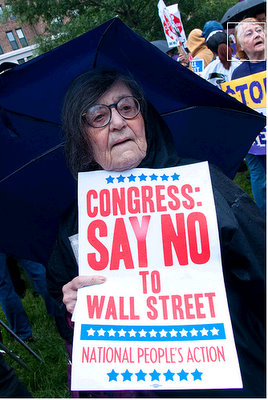 So it’s all come to this – tomorrow morning it’s expected that the historic Wall Street reform bill will be voted on around 10:30am, and more than likely will pass.

Sen. Ben Nelson, a Nebraska Democrat was one of the Senators that was seemingly on the fence about which way he would vote on the legislation. But according to BIC, today he spoke out with this:

“Nebraska taxpayers have already been asked to bail out banks and now we must protect them from future abuses by Wall Street that cost thousands of Nebraskans and millions of Americans their jobs, savings and financial security,” Nelson said in a press release Tuesday announcing his support for the bill. “I will support the Wall Street reform bill to end bailouts, add common-sense consumer protections and make sure that Nebraska Main Street businesses are not adversely affected as we rein in recklessness on Wall Street.”

From HuffPost Hill – It’s been a little less than two years since major Wall Street banks brought the global financial system to the brink of collapse, triggering a steep economic decline and crisis-levels of unemployment. Now, the last time they did that, they wiped themselves so clean off the map that they had little clout to battle Democrats. The SEC and Glass-Steagall were the result. This time around, Congress bailed them out so they were in good enough shape to lobby against the inevitable reform effort. Still, the bill could’ve been much worse, and began improving after Goldman Sachs got itself indicted and the debate was held out in the open on the Senate floor. And the most influential (non)senator may well have beenthe labor-backed Bill Halter, whose primary challenge prodded Blanche Lincoln to slash away at Wall Street. Her derivatives package will cost major banks billions, money that will be redirected into the real economy. Not bad for a $10 million investment.
If the GOP feels like obstructing, it can stave off a vote on final passage until Saturday, but word is they have no plan to do so. The vote should go down around 10:30 a.m.