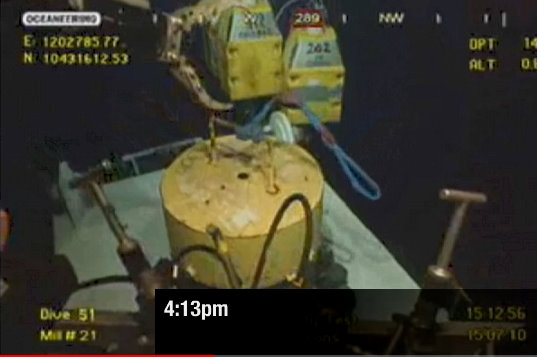 Yesterday was the day that everyone affected by the BP oil spill has been praying for. BP was able to successfully shut off the 2 million gallons of oil per day that has been gushing from their broken pipe since April 20th.

At around 3:30pm, BP was able to start closing valves on the seal cap placed over the broken oil pipe. This procedure was a risky one because 1) it has never been performed at depths of 5000 feet and 2) with the valves closing, pressure could burst other parts along the pipe causing more oil spill to rupture.

As of now, BP is reporting good news so far with their procedure. BP and government engineers and scientists are monitoring the pressure within the pipe to ensure that the pipe, and the seal cap, are stable.

BP says that if all goes well, within a couple of days they will be able to start opening up the valves to allow oil to flow up to oil containment ships at the leak site.

Here’s the video of BP stopping the oil from gushing from the broken pipe: