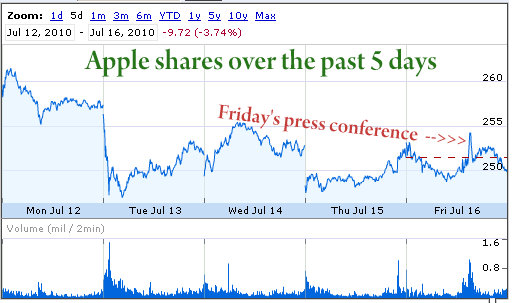 Looking at the chart for Apple shares this past reminds me of a roller coaster that I just rode at Hershey Park in PA. Massive ups and downs – sharp declines followed be even sharper inclines. There is no doubt that Apple shares have had a tumultuous week.

Even so, Apple shares (NASDAQ:AAPL) closed the week out down only 3.74% which is not much off the mark of the entire NASDAQ which closed down 3.11%.

Apple had a lot of criticism flying in its face this week over the iPhone 4 antenna and signal strength issues. It got so bad at one point that the Senator from New York, Chuck Schumer, chimed in with his own criticisms of how Apple and Steve Jobs were responding to the issue.

I expect Apple shares to rebound this coming week due to a favorable press conference that Steve Jobs had today with the press. During the press conference, Mr. Jobs discussed the iPhone 4 antenna issues, admitted there were problems, and offered solutions to iPhone 4 customers. Ultimately, he let customers know that Apple is going to do everything they can to ensure that their customer base is 100% satisfied with the iPhone 4. And this message of clarity, direction, and leadership from Steve Jobs will probably allow Apple shares to shed some of the jitters it experienced this past week.

Here is what some analysts have to say right now about Apple shares:

Analysts try and prepare investors for the fallout from today’s call.