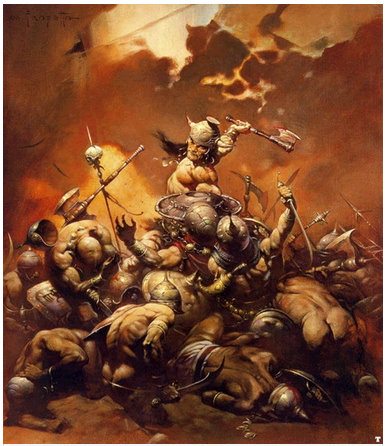 Frank Fazetta is surrounded by controversy and turmoil. Unfortunately, the majority of this stems from his family feuding over his estate estimated to be worth tens of millions of dollars.

One of Frank Frazetta’s more popular works of art is the ‘Conan the Destroyer’. And just recently, a private collector paid the Frank Frazetta family estate $1.5 million for the painting.

$1.5 million is the highest amount ever paid by someone for a Frank Fazetta art piece.

Frank Frazetta died in Florida at the age of 82. According to the AP, his iconic illustrations of Conan the Barbarian, Tarzan and other characters often graced comic books, album covers and movie posters.

In recent years, his children have fought over an estate estimated to be worth tens of millions of dollars.

The feud boiled over in December when Frank Frazetta Jr. used a backhoe to try to break into the artist’s museum in the Pocono Mountains.

Above is the image of the $1.5 million dollar painting ‘Conan the Destroyer’ by Frank Frazetts.