The popular Facebook messaging application, Chit Chat for Facebook has been upgraded to version 1.4 which is reported to be the most noteworthy update since its initial launch just over a year ago.

The main advantage of the Facebook chat program, Chit Chat for Facebook, is that it allows you to use one of the most popular features of Facebook: Facebook chat, without having to navigate around the Facebook site itself, which can be notoriously slow and unstable at peak times.

The dedicated Facebook messaging application is similar in appearance and functionality to other popular instant messaging platforms so that even the most casual computer users will feel instantly familiar with how Chit Chat works. However, unlike most messaging applications Chit Chat has been carefully engineered to be lightweight and efficient – as such it doesn’t take up much valuable memory or processing power and so it suitable for old and new computers alike. For example, on my netbook computer Chit Chat runs without fault whilst other messenger applications tend to lag. 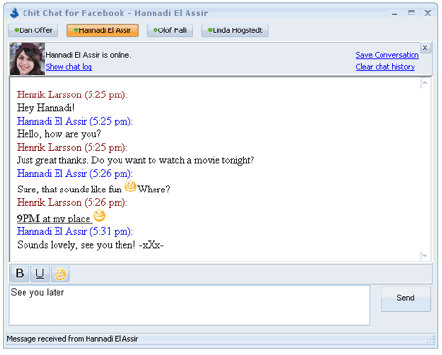 For all its benefits Chit Chat for Facebook doesn’t currently support being able to see the away Facebook status, I’d like to see this included in the next update of this instant messenger.

With Facebook’s ever growing popularity and increased involvement in our everyday lives – being used to arrange social gatherings, interact with distant friends, and keep in touch with the latest gossip. Chit Chat, a specifically designated IM app that allows you to perform these tasks, without trawling through the main Facebook site every time, is invaluable to an avid social networking addict.